The Flashy Body or Functional Fitness? 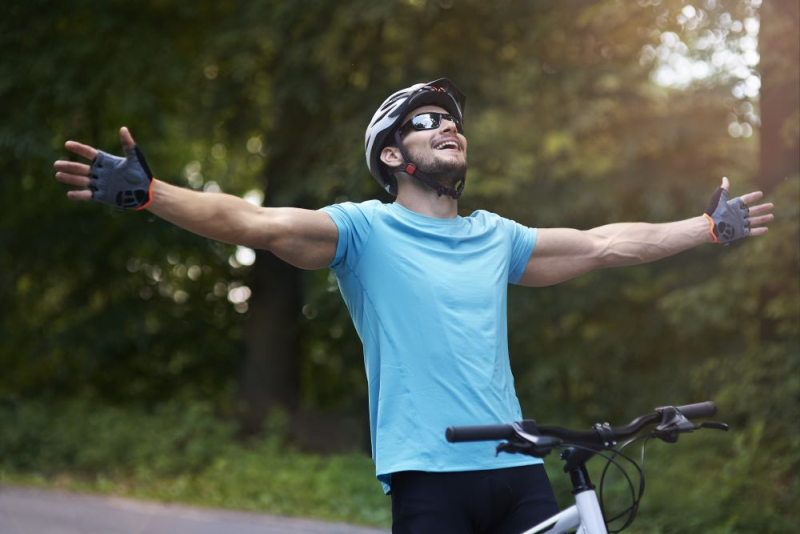 If you're riding a bike or carrying a full-load backpack on an uphill trail without huffing and puffing, you're functionally fit. The same goes for carrying two six-packs of 1.5 liter bottles of mineral water home from the grocery store…

Did you ever ask yourself, "Why did the Creator give me a body?" Surprisingly, most people don't know the answer.

* Craig has humongous biceps from the hundreds of heavyweight dumbbell curls he does every day. Yet, when his wife asked him to take down a can of tuna from the top shelf in her kitchen pantry, he couldn't do it because his shoulders were too tight. He simply couldn't raise his arms that high, despite his 6'1" frame. Frustrated, his 5'3" wife stood on a kitchen chair and took the can of tuna down herself.

* In her own words, Marianne "feels dead" if she misses a day of spin class. She spins for an hour a day, proud of her figure. She eats whatever she wants because she burns about 700 calories in one humongous, exaggerated session that's going to bring her to burnout, sooner or later. But, she's so into her peddling as the techno-background music pumps her up, that she slouches over the handlebars, which she grips tightly. Her figure isn't at all attractive because she can't stand up straight. What's more, she can only carry her attaché case to work (weighs about 5 pounds, including laptop) in her right hand because she's developed lateral epicondylitis (tennis elbow) in her left arm. So now, in addition to her slouching, she walks with one shoulder higher than the other because she only lifts things with one hand.

* Abe, in his quest for six-pack abs, does over a thousand crunches a day. Sure, his stomach muscles are like iron but his hip flexors and lumbar spine are so tight that he can't touch his toes without deeply bending his knees. Abe looks good on the beach but he sorely lacks inner core strength and like Marianne, his posture is terrible. And lately, he has these terrible backpains, but like a mule, he keeps on crunching.

* Naomi is the women's weightlifting champion of her gym. She can military press and bench press more than women twice her size. Yet, the other day, she bent over to pick up her baby and she pulled her back out.

What's wrong with Craig, Marianne, Abe and Naomi? They are into what you might call "cosmetic fitness", working out for the flashy body, the bulging biceps, the six-pack abs, the "Hey, look at me!" legs and the general Miss or Mister America body. That's ego fitness and it has nothing to do with serving Hashem. Many of the poolside-promenade people lack functional fitness. They can't perform basic functions in life. Their workouts are wrong and they oftentimes are detrimental to overall health rather than conducive to it. How?

The muscle/bikini beach folks focus on isolated muscle groups rather than on multiple muscle groups working together in harmony. In the words of Greg Roskopf, MS, a biomechanics consultant with a company called Muscle Activation Techniques who has worked with athletes from the Denver Broncos, the Denver Nuggets, and the Utah Jazz, "Conventional weight training isolates muscle groups, but it doesn't teach the muscle groups you're isolating to work with others".

When we're functionally fit, we're quicker and more agile in our daily functions. Functional fitness exercises are designed to train and develop your muscles to make it easier and safer to perform everyday activities, such as carrying groceries or playing a game of hide-and-seek with your children. Good posture and functional fitness go together. There's no reason in the world that a senior in his or her 80's can't be functionally fit, but consult with a qualified physician or seniors' fitness training specialist before you embark on any exercise routine on your own.

You don't have to spend hours in a gym. Fifteen minutes a day of functional fitness exercises are sufficient to keep you feeling great. I love Pilates-style core-strengthening exercises and total bodyweight exercises as squats and pushups because of all the muscles they involve and that you don't need any apparatus. Such bodyweight cardio exercises as walking and swimming will keep you trim and fit from head-to-toe. Body-balance, stability and flexibility are so very important components of functional fitness too; Yoga-style exercises are great for all three. Shlepping groceries up three flights of stairs is also a wonderful full-body exercise.

Never forget also that good dietary habits are twice as important as exercise. Sabbath and holidays are for delight, but not for eating into oblivion, especially grossly unhealthy things. All good diets tolerate, even encourage, one cheat-day a week but that doesn't mean alcohol-and-pastry suicide. Like our working out, our eating and drinking should be for the sake of maintaining a fit body, whose purpose is to capably house a serene soul that's connected to its Creator for 120 happy and healthy years, amen!